As medical science and technology continue to advance, we are beginning to see more how problems in one area of the body can have massive effects on other areas that don’t seem at all related. Proclaiming that the body is an interconnected system might seem almost silly because it’s such an obvious fact, but 20-30 years ago, most people wouldn’t have thought that problems with the teeth or gums could increase one’s risk for heart disease, heart attack, or hemorrhagic stroke.

Understanding the connection between the mouth, the bloodstream, and one’s overall health depends on understanding how dental and gum problems develop, and their ultimate results. In this post, we’ll be discussing: 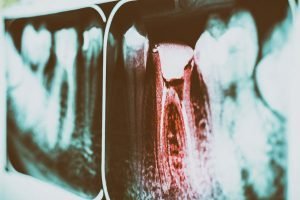 As with almost all dental problems, dental decay begins with plaque. This is the sticky, fuzzy substance that accumulates on your teeth when you go long periods of time between brushing.

Plaque is the result of a combination of carbohydrates from the food that you eat, and the bacteria that naturally lives in your mouth. The combination of the two results in an acid, which later builds up with further food particulates to become a thick, sticky film.

This is why foods that are rich in carbohydrates – sugary and starchy food, most notably – increase your risk of dental decay.

This is how the dental decay progresses:

For a long time, we used to believe that the problems began and ended at the level of the teeth and gums. However, research suggests that the bacteria involved in dental decay can make its way from the gumline directly into the bloodstream. From the bloodstream, the bacteria from the infection can make its way to the various blood vessels in the body. 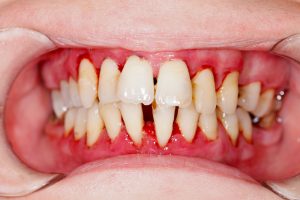 Periodontal disease is often referred to simply as “gum disease” and the two names are essentially synonymous. However, it is often mistakenly referred to as “gingivitis” or “periodontitis”. So, before we move on, let’s define our terms:

As with dental decay, periodontal disease is caused by plaque. Specifically, it’s the result of plaque making its way into and underneath the gumline. This is why it’s imperative to massage the gumline as you brush your teeth in order to clear out plaque that could be lingering on it.

If left to accumulate on the gums, the body responds to plaque by releasing a hormone that causes the gums to become inflamed. This inflammation is often painful and causes the gums to bleed easily. This is the early stage of periodontal disease called gingivitis, and can be treated and reversed with dental cleanings and good dental hygiene.

If left untreated, gingivitis can progress into full on periodontitis, an advanced stage of gingivitis in which the gums loosen from the teeth (due to the inflammation) and recede away from the teeth and the tooth roots. This often results in tooth loss. Periodontitis is technically reversible, although it is more difficult than reversing gingivitis.

As we’ve seen above with tooth abscesses, the gumline has a direct root to the bloodstream, and from there, to various vessels of the body, including the arteries of the heart. Consider that heart disease is a matter of plaque building up on the interior walls of heart.

Contact Your Dentist for Dental Cleanings and Other Services

A major part of proper dental hygiene is making regular appointments with your dentist for check ups, cleanings, and other services that you need to stop, reverse, or treat dental decay and periodontal disease. It’s always better to solve these problems early on, as it is easier and less expensive to treat than in later stages of development.