Evolution Of Interior Design Trends From Traditional To Industrial

If a saying ever held true, the famous “everything old is new again” would be true for interior design through the decades.  Terms such as “traditional” and “modern” are used regularly when describing home interior styles that are popular now, but these have been around for decades, centuries even for some, and the elements that make them desirable for interior design are updated and renewed for each new generation.  Let’s take a look at the evolution of some of the most sought after home looks!

There are more interior design styles than we can discuss here, so let’s focus on some of the most popular in America currently:

These styles have sub categories as well, we will simply cover the basics of each style and it’s most recognizable and beloved elements.  Traditional style has been around for the longest amount of time so it is the perfect interior design style to begin with.

Traditional style is exactly that: traditional and classic.  This style really originated in Europe in the 18th through the 19th century.  The parlors of the Georgian era with the chandeliers and the wingback chairs, the damask wallpapers and full draperies.  This is the genesis of what we now refer to as Traditional style, in the “tradition” of these eras. The idea was that the interiors, the rooms people lived in, would be elegant and also comfortable.  These were places that people would be entertained in and they were meant to be relaxing, even if they appeared to be somewhat ornate and luxurious. Our Traditional interior design style now has a little bit less emphasis on “luxurious” and more on “refined”.  Refind, relaxed, and lovely. Wingback chairs (always in pairs!), pretty sofas upholstered in florals, plaids or stripes, Persian style rugs, and chandelier lighting are some of the stand out elements that define traditional style now. Colors will be classic, not trendy.  Marble accents such as mantle and desk tops fit perfectly here. Symmetry of the furniture and accessories is important, pairings prevail! If you want candles and candlesticks, make sure they are in pairs! Window coverings follow the same example…long drapes and sheers, in rich fabrics and patterns such as brocades and damasks is what works here.  Shutters in rich woods like maple, mahogany and cherry will look at home with Traditional style. Traditional does not mean dated, however. This style is as timely now as it was in its original era, it works in all types of homes. 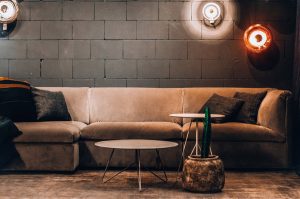 Modern style design also comes to us from Europe, the post World War II era brought a new style to home design and decor.  Designers and artists in the Netherlands and Germany introduced a new “less is more” and “form follows function” emphasis on home interior design.  Their designs were sleek, they had distinct geometric symmetry, very few curvy lines and very little, if any, ornamentation. This style relies on pieces of furniture or art that has an impact on its own.  Nothing needs to be paired, as each piece makes a statement. Materials such as metal and plastic grew popular. Upholstered furniture uses materials that are not heavily patterned, or if they are patterned, the pattern is geometric and not ornate.  Colors are muted, or very bright. Black and white figure heavily in modern design. Window coverings are simple and functional. Blinds are a fantastic choice, in metal or plastic or painted wood. They look clean and functional and do not distract from the other furnishings.  Draperies should fade into the background, subtle neutral colors and absolutely no ruffle or valances. This style has been popular since it was introduced. In the US, the “Midcentury Modern” style is especially endearing, it gained many admirers from the television series “Mad Men”.  The low profile furniture with clean lines and dark finishes is sought after even now. Because the style is not showy, artwork display in a Modern style home interior will stand out, and so a lot of people associate Modern interior design with artists and artwork. 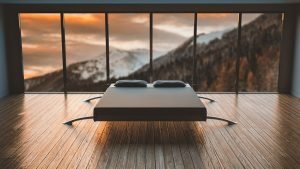 Besides Modernism, Minimalist style take a big heap of inspiration from the traditional culture surrounding Zen philosophy in Japan.  Japanese Zen influenced style is all about simplicity, and you can see it’s influence in Minimalist style. Common materials would be wood, metal, stone, and natural fabrics.  Window coverings in this style will be unobtrusive micro blinds and simple shades. Curtains may be too fussy for a Minimalist style. Color palettes in the Minimalist style should be very neutral, such as white, grey, black, blue, and other pale colors.  Obviously accessories and accent will be very carefully edited. Perhaps a few houseplants to contribute to the nature theme, but in simple pots. Maybe a few sculptural pieces of art, but that’s about it. You don’t want anything to interfere with the very bare essence of Minimalist design. 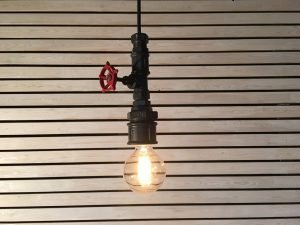 This is the newest interior design style to emerge, although many of its key elements hearken back to the Industrial Age.  Remember the phrase from the beginning, “everything old is new again”? Well, here you go…not only are the design elements of Industrial style from an older era, but often the actual materials and decor are from the actual industrial age, or are reproductions from that era.   While Industrial design is not minimalistic, it does borrow from Minimalism with regard to some of the popular materials used such as wood, concrete, metals and glass. It also incorporates materials that are richly textured and varied such as brick, iron, exposed pipes, and textured fabrics like burlap and linen.  Color doesn’t really play any key role in Industrial design. Imagine old barns and farm implements and also old factories…whatever colors are existing in those environments are going to be great in an Industrial home interior. Metal blinds and micro blinds are going to be perfect in an industrial style home as well as shades made from textured natural fabrics.  Furnishings can be of pretty much any style, but leather upholstery really fits well with this style. Decorative items can be vintage tools, implements, rag style rugs, and again with the houseplants. A really fun bit about Industrial design is that other furniture or decorative pieces from other styles such as Modern and Traditional can seamlessly fit in with industrial style.  It is a fairly flexible style.

Whatever style you like best, whatever fits your lifestyle and tastes the best, you will find plenty of inspiration out there, so have fun with your home interior design!